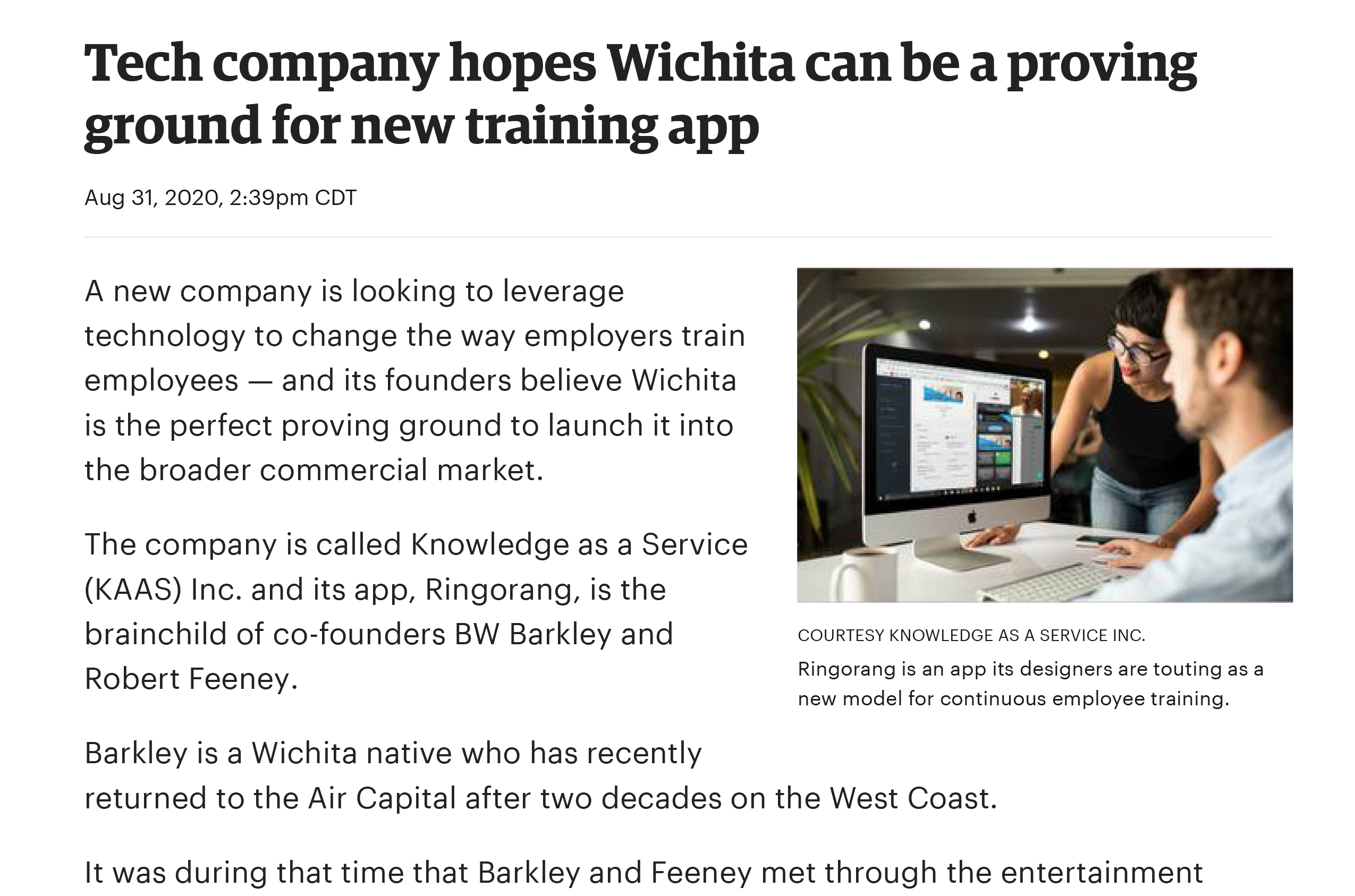 A new company is looking to leverage technology to change the way employers train employees — and its founders believe Wichita is the perfect proving ground to launch it into the broader commercial market.

The company is called Knowledge as a Service (KAAS) Inc. and its app, Ringorang, is the brainchild of co-founders BW Barkley and Robert Feeney.

Barkley is a Wichita native who has recently returned to the Air Capital after two decades on the West Coast.

It was during that time that Barkley and Feeney met through the entertainment industry and the foundation for an idea they believe has global implications was laid.

The Ringorang app provides continual training in an easy and interactive format. What differentiates the platform, Barkley and Feeney say, is that it is actually changing behavior, not just teaching answers to be marked on a test and forgotten soon after.

“Changing behavior is not an event, it’s a process,” says Barkley.

The earliest iteration of the app started as a way to keep viewers engaging with a game show for the six days of the week in between TV airings.

The pair made the platform competitive and fun, and the user results quickly made them realize they were onto an idea with much bigger applications.

As they began to take the idea out into the business world, they eventually landed with Washington state utility provider Puget Sound Energy after its CIO said he needed a way to get technicians to actually take the training sessions required of them.

While having added utility customers over time — including helping change customer behavior related to energy efficiency — those early results in Puget Sound got more than a passing grade from the CIO.

That executive, Rudiger Wolf, is now CEO of KAAS, which formed when the co-founders teamed up with Wolf and CFO Tom Zorch.

Along the way, they’ve added new customers, including Verizon and a Fortune 50 technology company that they contractually cannot identify.

That history, Feeney says, give Ringorang the advantage of already being a proven product ready to deploy in any setting.

And, as opposed to training sessions that take time away from productivity, the short-burst, continual training can be incorporated into the daily workflow.

The pair says that also typically reduces overall training costs and, importantly, provides measurable data related to the desired behavioral change. The company has much more on how the platform works available on its website — but it can be likened to playing short quiz games that is actually teaching employees the desired content in the process.

They see Ringorang as particularly valuable when introducing new organizational processes — something that will likely be needed at employers of all sizes as operations change around safety concerns and requirements due to Covid-19.

“We couldn’t be on the crest of a bigger wave,” says Feeney.

Eyeing growth they believe can eventually go global, the KAAS team sees Barkley’s home base of Wichita as a community rife with opportunity.

Barkley is not only getting the platform in front of as many potential local customers as possible, he’s also mining local connections to raise funds from Wichita investors.

They’re planning to raise $10 million in the next year to help KAAS grow, including adding up to a dozen new salespeople.

There will also be additional employee growth related to services and support as the customer base grows.

And many of those new employees could be based in Wichita, where the KAAS team hopes the company can be part of helping grow the local economy and technology sector.

“I want to build this out from Wichita,” Barkley says. “I want Wichita to feel and experience these results.”